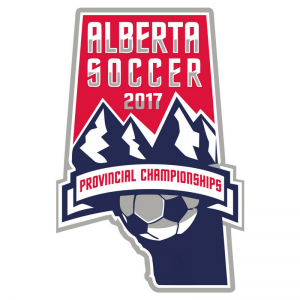 (September 7, 2017) – Last weekend saw Alberta’s top senior amateur teams compete in the hopes of being awarded the Championship title, and for four of the teams, a spot at Nationals in Surrey, BC this October.

With 66 teams playing in 13 competitions, there was plenty of entertaining soccer for the many spectators to enjoy. And for the second year running, those who weren’t able to attend the final Jubilee Shield and Challenge Cup games in person were still able to watch the games live, as they were live-streamed at SportsCanada.TV.

The Provincial Championship winners and The Pint Fair Play winners for each of the competitions are as follows:

The 2017 Jubilee Shield Championship saw Victoria face off again NWU for the second year in a row. Victoria came out to an early lead in the first half with a penalty kick conversion that resulted from a late challenge by a NWU fullback. Not to be deterred, NWU struck back and levelled the tally at 1-1. However, Victoria came on strong early in the second half and scored two more goals, forcing NWU into an uphill battle if they were to come back. Late in the second half, Victoria committed a foul in the box, and NWU was awarded a penalty kick. Unfortunately, NWU was unable to convert the effort, but scored minutes later off a free kick taken just outside the box. A valiant effort was made by both teams, but Victoria was the stronger that day, winning 3-2 after full time, thus punching their ticket to National Championships in Surrey, BC.

The 2017 Challenge Cup was a true “Battle of Alberta” with Edmonton’s 1st seed Green and Gold taking on Calgary’s first seed Callies for the right to represent their province in the Senior National Championships. Callies scored halfway through the first off a beautiful cross that was sent home by Callies FC striker. Green and Gold nearly equalled the tally with a beautiful effort off a set play that rang under the crossbar, but unfortunately didn’t cross the goal line. The second half remained scoreless despite the sustained offensive charge led by Green and Gold, and the final score was 1-0 Callies.

Alberta Soccer wishes both Victoria and Callies the best of luck as they take on the rest of Canada’s best in Surrey, BC, this October at the National Championships!

The winning teams in the Masters/Classics division will also find themselves competing against other Provincial winners from Western Canada when they attend Canada Soccer’s Club Championships in Edmonton later this month. Congratulations to Scottish Masters and Green & Gold Classics – we wish you luck at Nationals!