Skip to content
Alberta Player Successes for the month of May 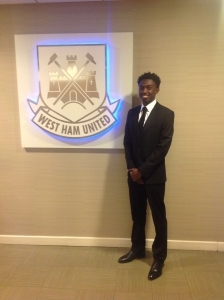 (June 1, 2016) Malyk Hamilton of Calgary signed a scholarship this past month for West Ham United in England to play for the club’s U18 Academy. West Ham United’s first team finished 7th in the Barclay’s Premier League this past season.

Another Calgary Southwest United product has landed in Germany. Bori Falaye was offered a trial at Borussia Dortmund earlier this month

Alphonso Davies of Edmonton scored his first professional goal on May 15 with the Whitecaps FC 2 in a win over the LA Galaxy II becoming the youngest player at 15 to score in USL. Alphonso has also been named for the Vancouver Whitecaps squad facing Ottawa Fury in the first leg of the Amway Canadian Championship semi-final.

Canada Soccer has had a busy month with their National Team Program. This included a U-15 Showcase, the selection of a men’s U-23 squad for a Caribbean tour, a Mexico friendly for the U-20 Women, naming the 24 man squad for the Men’s International Friendly series in Austria, and naming a 20 player roster for the women’s team matches versus Brazil.

Alberta players selected for the above mentioned national team programs include: