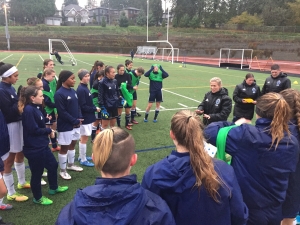 (November 20, 2017) Picking up where the senior FC Edmonton and Whitecaps FC REX squads left off earlier this month, the 2002-05 REX girls welcomed the opportunity to train with some of the best at the HPP Combine in Vancouver last week. The trip afforded the players a window into what training at a National Team camp might be like.

Here’s what they got up to:

Day 1: Upon arriving in Vancouver Alberta’s REX squads enjoyed meetings with Whitecaps Coaching Staff and management outlining objectives of the program and the week ahead. Discussions led to playing philosophy and principles that players can adopt on the field. Training with Emma Humphries (WFC REX Girls Director) focused on building and switching play.

Day 2 started with a mobility session designed to activate their bodies and prime them to play later that day.  AB South played the Girls Elite REX and AB North played the first of the Whitecaps Academy Centres squads. Games were very competitive with all sides very evenly matched. The girls were watched by Girls Elite Rex staff coaches, Rhian Wilkinson (REX Director), and Bev Priestman (Women’s National EXCEL Director and head coach of U17 and U20 National teams). To cap the day all players were treated to an inspiring and interactive presentation by former national team player and current REX Director Rhian Wilkinson.

Day 3 was met with a unique mix – 45 minutes session time plus 45 minutes of match time against a select group of the top players from the Whitecaps Academy Centres. Another very competitive fixture where both the Alberta North & South REX girls were tested and pushed both technically and tactically. A training session followed, where players worked on passing and receiving with the goalkeepers working on their agility and shot stopping. Top notch sessions from the Whitecaps Girls Elite REX staff coaches.

Day 4 started with a group mobility walk followed by a College Transition Program introduction by Whitecaps Academy Centres Director, Marinos Papageorgopoulos. The girls then reviewed game footage from match play earlier in the week as part of their match preparation. Games in the afternoon saw AB South paired with the Whitecaps Academy Centres squad and AB North facing a very talented Girls Elite REX side that took the girls out of their comfort zone.

Day 5 was another travel day for the return leg home. But before that AB North had a morning encounter with AB South in their final act of the tour, watched by REX staff. As always north vs. south produced a competitive fixture to showcase Alberta’s talent in. 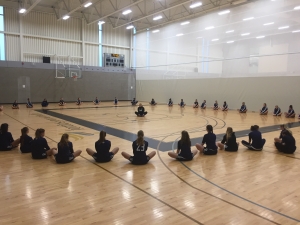 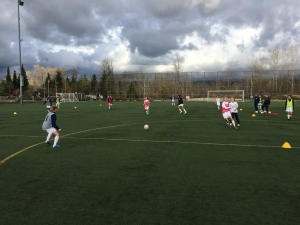 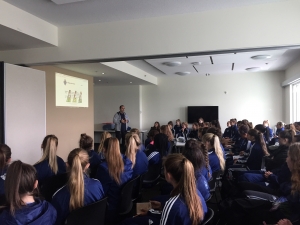