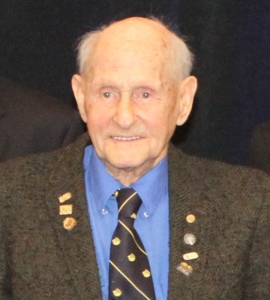 Alberta Soccer Association would like to extend warm wishes to Life Member Douglas Redding as he turns 100 yrs on August 28, 2020.

Mr. Redding was awarded the Alberta Soccer Shield of Merit 1983 for his work in the Central Alberta Soccer Association as a leader who had a great interest engaging the indigenous community.  He is truly respected by the soccer community for his long term commitment to our sport and his wonderful personality, always willing to lend a helping hand.

He served on the Alberta Soccer Board of Directors in the early 1990’s where he earned the affectionate nickname ‘Dad’ from his peers being older and wiser than they were and was awarded the prestigious Alberta Soccer Life Membership in 1994.

Mr. Redding has continued to stay connected with our membership attending many Alberta Soccer Awards banquets over the years and events such as the FIFA Women’s World Cup in 2015.

We congratulate him on reaching this remarkable milestone and wish him continued good health and happiness.