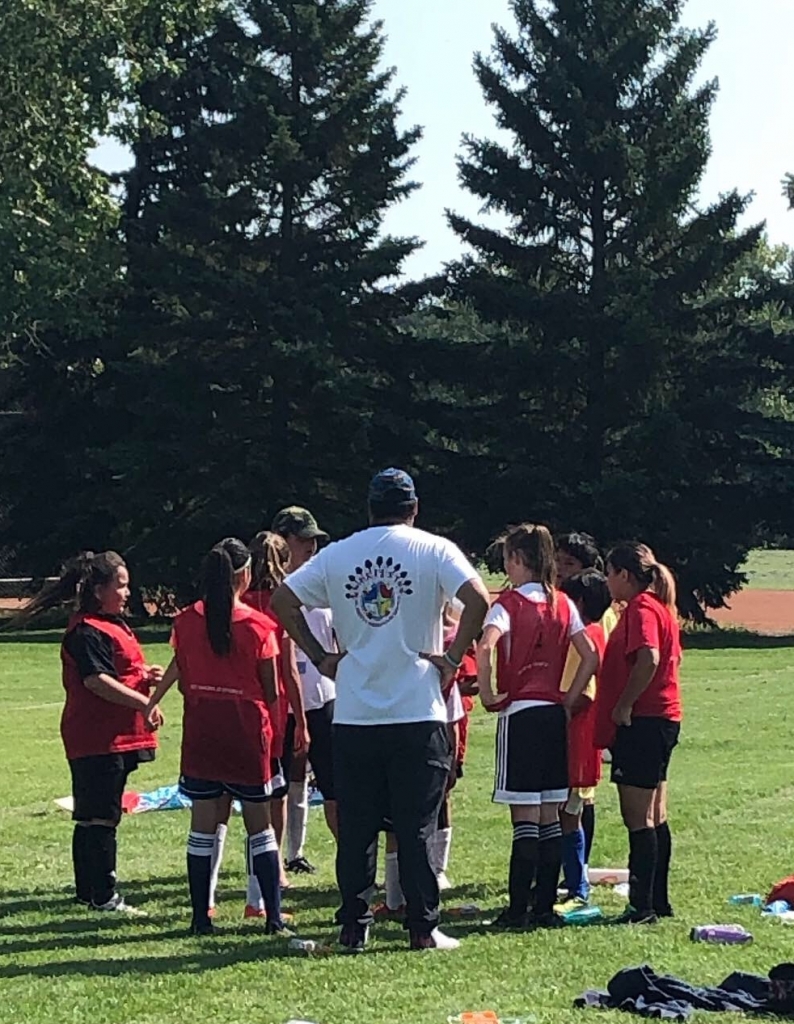 Over the past week, athletes from around the province have been competing at the 2019 Alberta Indigenous Games (AIG) in Edmonton. The Games are an “Olympics-style”, multi-sport event held annually for Indigenous youth living in Alberta.

This marks the first year Alberta Soccer has partnered with the Games organizers, supporting the AIG mandate and its engagement with Indigenous youth in our province. From supplying the referees to running coach and player development sessions, Alberta Soccer was excited to work alongside the AIG community toward the common goal of providing opportunities for all players to reach their full potential.

For Gary Cowan and Amanda L’Hirondelle, coaches of the Tigers junior squad, the partnership between the Alberta Indigenous Games and Alberta Soccer is an important one. For starters, this year saw well over three times as many players competing in the soccer tournament as compared to past years. Not only does this mean more opportunities for players to compete provincially, but also at the National Level.

Alberta Soccer’s John Clubb, Manager of Grassroots Development, and Sam Blackett, who were heavily involved in the coordination of the soccer tournament at the Games, will also lead Alberta teams at the North American Indigenous Games (NAIG) next year, with Blackett coaching the U16 Girls squad and Clubb coaching the U19 Girls team. Last week’s AIG provided an added opportunity for them to scout players for next year’s National competition.

“Proper assessment from Alberta Soccer coaches at this week’s tournament helps more talented kids be recognized for possible inclusion at the provincial level as well as at the 2020 NAIG in Halifax,” said Cowan.

And while it’s crucial to create opportunities to identify high performance players outside of the typical stream, it’s equally important to nurture a passion and love for sport among all the involved players, regardless of skill level. One way to do that is by connecting with each of the players and coaches at their individual level of development. To achieve this, Alberta Soccer coaches ran sessions using the Preferred Training Model (PTM), an engaging station-rotation approach to training that supports the individual.

Learn more about the Preferred Training Model – watch the video

For many of the teams at the Alberta Indigenous Games, the tournament marked the first time they’d ever met as a group, let alone competed as a unit. This was true for Cowan and L’Hirondelle’s team, which was made up of players at different age and skill levels who had never played together before. The training sessions helped the players get on the same page and start working together. In Cowan’s case, this ultimately led to earning gold in their competition.

It was an honour for Alberta Soccer to work with the Indigenous Games, and due to additional funding from the Federal Government, Alberta Soccer is pleased to be able to continue its work in Indigenous communities moving forward.

The Government of Canada recently announced a commitment of $47.5 million over the next five years in support of sport and physical activity programming for Indigenous communities. Of this, nearly $1 million is earmarked for the Indigenous Sports Council Alberta (ISCA), a non-profit multisport organization representing First Nation, Metis, and Inuit youth in the province.

Alberta Soccer has recently begun a purposeful engagement in local Indigenous communities to expand soccer’s reach in those communities, and to provide pathways for both grassroots and high-performance Indigenous players, coaches, and referees.

“In terms of development, Alberta Soccer’s goal is to “cast the net” far and wide to engage and help develop as many players and coaches as possible,” said Franc Cioffi, Alberta Soccer Technical Director. “Our partnership with the ISCA, and the federal government’s additional funding, will assist us in promoting soccer within our First Nations communities for all levels of players and coaches – from new grassroots participants all the way to the high-performance player or coach.”

Read more about the Federal Funding here and here