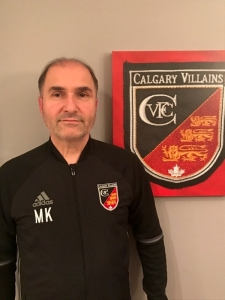 (February 9, 2017) Calgary Villains FC Academy Director, Munib Koric, has been accepted for an apprenticeship at Real Madrid C.F. The UEFA Pro Licence is a coaching stream from UEFA, the official governing body of European football. The licence is the highest coaching certification available and follows the completion of the UEFA ‘B’ and ‘A’ licences. A UEFA Pro Licence is required by anyone who wishes to manage a football club in the top level of a European nation’s league system.

Munib is well known in Calgary for developing top players in the city. He was a former Alberta Soccer Provincial Team Coach and is the Head Coach for the Calgary Villains Men’s Alberta Major Soccer League (AMSL) team which captured their first AMSL League title in 2015. Following his championship season, Munib was voted as AMSL Men’s Coach of the Year.

Some notable players who have developed under Munib’s coaching include:

Munib is the first Canadian to be accepted at Real Madrid for this prestigious apprenticeship. Upon completion, Munib will be among an elite handful in Canada who have fully completed this course. Munib will travel to Madrid during February to complete the first part of the course and will return in August to finalize the program and his certification. In between the courses he will continue his role as Academy Director with Calgary Villains F.C

Alberta Soccer would like to congratulate Munib on this unique accomplishment as we encourage all coaches in Alberta to continue to pursue further education and development opportunities.