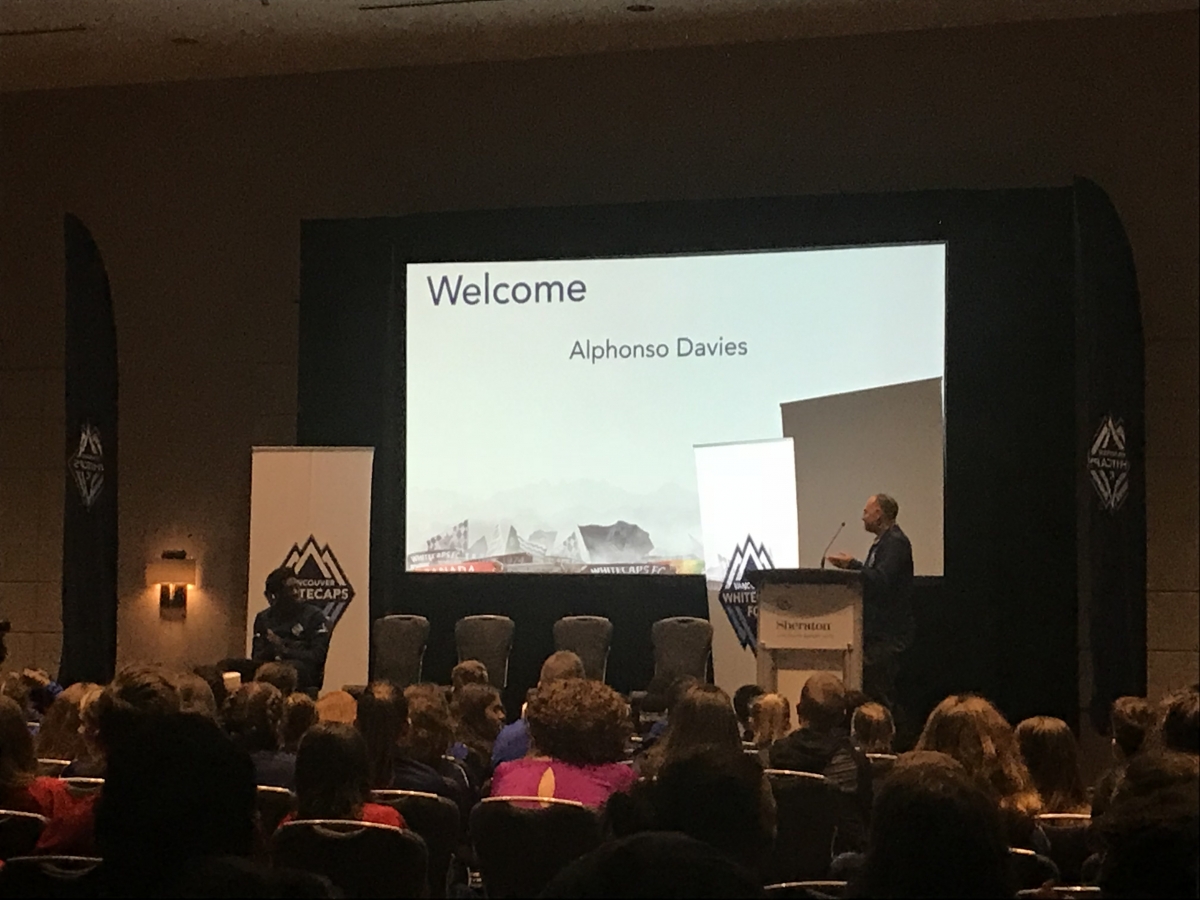 After settling into their new surroundings on Days 1 and 2, Alberta’s Provincial Teams were ready to absorb as much of the unique opportunity a professional environment brings on Days 3 to 6.

Day four saw all eight teams play matches and in the evening, teams were treated to a presentation from Bart Choufour, Director and Head Coach of the Whitecaps FC Academy Centres on the standards, expectations and the pathway to becoming a professional soccer player.

Day five was billed as a recovery and regeneration day for teams. Teams had the opportunity to explore the sights and sounds of Vancouver and sit down to watch Champions League matches. The girls were also able to hear from Emma Humphries on the standards, expectations and pathway to the women’s national team.

The boys faced off against an older U13/U14 Ontario side on day three. Some missed opportunities came back to haunt the boys in the end despite some resiliency after falling 2-1 down early in the 2nd half. The boys lost 4-2 with goals from Ben Schouten and Ohi Imoukhuede.

On day four, the boys struggled with an early start and tried to maintain their focus on attacking and defensive transitions early on. In the second half, strong possession helped create scoring opportunities leading to a 2-0 win.

On day three, the girls faced off against Team BC. The ability to dominate the midfield, and be creative with the ball led to a 2-0 win off of goals from Izzy Monk.

Day four brought an early game against the mixed PEI/Newfoundland team. Strong defense allowed the girls to contend against strong possession from their opponent early on. Alberta’s play picked up with some adjustments and a strong rallying team talk from coaches leading to a goal from Izzy Monk, her third of the tournament. Despite the improvement in play, legs started to tire towards the end of the game and PEI/Newfoundland were able to score two goals in quick succession to take the 2-1 win. Despite a slow start and playing against a physical opponent, the girls performed very well on day three.

The boys had a match against the Saskatchewan U13/U14 Boys on day three. Some early jitters set in and the boys found themselves down a goal early in the game. The boys showed their resiliency in tying the game before the half on a goal from Dino Golombos. The second half saw the boys go down 2-1 on a penalty kick but once again they battled back to grab an equalizer from Tal Kaplinsky. A late Saskatchewan goal would prove to be the difference as the boys emerged with a 3-2 loss.

On day four, the boys took on Nova Scotia U14 Boys. Despite playing against the bigger, older team the boys were able to score first and gain the early advantage. The game finished in a 2-2 draw off of two goals from Brian Ouanda.

The girls had an opportunity to practice and prepare on day three. Reflections from their day two match helped guide their training session as they looked forward to their game on day four against Ontario.

After getting over some nerves from the first game, the girls were able to perform on day four and showed their confidence in adjusting to their opponents weaknesses. The girls took a 3-2 win with goals from Brynn Hobal, Hannah Harper and Michelle Chakanyuka.

The boys took on the BC U14 boys on day three and despite falling to an early goal, quality interplay and a confident performance resulted in a 4-1 win for the boys. Goals were scored by Roberto Hurtado, Chike Ogbuke and Finn Linder with two.

The boys have been showing integrity, sportsmanship and class throughout their games. They’re often seen offering a helping hand to opponents who are down on the ground.

The girls also took on Team BC on day three and displayed a solid team performance from start to finish. Goals from Brooklyn Stephan and Sydney Remington (2) led to a 3-1 win by the girls.

Game two for the girls on day four saw a 2-1 defeat to Nova Scotia. It was a spirited performance against a very physical team. Nyema Ingleton scored the lone goal for Alberta.

The boys had an opportunity practice on day three as they continued to build unity within the team. They participated in a light, fun skills circuit with the coaches getting involved as well as they look forward to their next match.

Day four included an evenly matched game against Manitoba. A draw could have been a justified result but a penalty kick called in the last two minutes of the game gave Alberta the 1-0 win as the kick was slotted home by Michel Dieu-Merci.

The team also held a practice on day three in an effort to prepare for their next game against Manitoba.

On day four, the girls produced a dominant offensive and defensive display with zero shots allowed on goal and capitalizing on their goal scoring scoring opportunities. The girls won 6-0 over Manitoba with goals from Jyla Erandio (3), Alout Agar (2) and Marina Simao.

Stay tuned for updates on the final days of the combine in coming days.