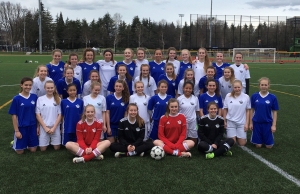 Day 4 brought with it more healthy competition and learning opportunities for the players – here are the highlights:

The U13 Girls North put in a solid performance against a slightly older Manitoba side and came away with a 2-2 draw. It was a fairly even game with both sides creating chances. Manitoba was a well prepared team and scored in the second minute of the first half followed by Alberta equalizing later in the first half. Alberta continued on with the scoring into the second half going up 2-1 with Manitoba equalizing in the 73 rd minute. Manitoba’s cohesive performance reinforced that they were well prepared to take advantage of moments where Alberta was not as organized as they would have liked.

Another tough day for U13 South Girls who fell 4-1 to a mix of U13/14 girls from PEI/Newfoundland. Despite some untimely errors, the girls continued to battle with great courage. Indeed, most of the second half was played in the opposition half as the girls sought to fight to the end. A great individual effort lead to Alberta’a lone goal and they look forward to finishing off their week against a solid BC girls side.

In today’s Alberta ‘Classico’ the U14 Girls South continued their strong performances with a 2-0 victory over their provincial team mates; the U14 North Girls. The south girls stormed out in the first half to a 2-0 lead with quick combination play and extraordinary individual efforts. The second half was more balanced as both teams committed to knocking the ball around and exchanging multiple chances. It was a great game to watch.

The 04 Boys “Battle of Alberta” saw the U13 South play the U13 North in a great showing of technique under pressure and quick decision making. Alberta North took hold of the first half with with quality combination play, springing numerous attacks. By the end of the first half, the north side was up 1-0. Alberta South managed to hit another gear in the second half connecting well and creating lots of chances. Scoring early to tie the game at 1-1, the south side continued the pressure and were able take the 8 minutes from time to complete the 2-1 comeback.

The 03 Boys “Battle of Alberta” was also ended in similar fashion with the U14 South side completing a 2-1 comeback win over the U14 North squad. The north boys were able to take advantage of a prevailing wind during the first half coupled with creative combination play to take the lead 1-0 after the first 35 minutes. Bolstered by the opportunity to play with the wind at their backs in the second half, the south boys applied pressure all over the park and were rewarded with a penalty kick inside the first five minutes that was buried. The score remained 1-1 up to the last 10 minutes of the match where south defensive pressure once again created a giveaway that was slotted home into an open goal. It was a spirited match played by two technically sound sides that was enjoyable to watch by all.