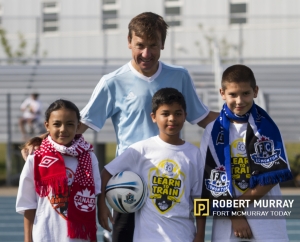 More than 20 years after a generous donation was made to Alberta Soccer, the money has been put to great use.

In 1994, the Dr. Herb Link Memorial Fund gifted over $8800 to Alberta Soccer; and after two decades, an employee discovered the account. As it turns out, the timing was perfect. Shortly after the discovery, a club coach reached out to Alberta Soccer, seeking assistance for a couple of his players.

Eric Sauze, head coach of U14G Edmonton West Raiders, contacted the office in support of Aliah Gray and Chasity Pete, two First Nations players on his team. Both girls were selected to play with the Native Indian Football Association (NIFA); first on Vancouver Island at a player camp in May ’16, and then in Cuba at an Indigenous player’s tournament in August ’16.

In 2015, the NIFA team won gold in Brazil at the World Indigenous People’s Games. Knowing what a great opportunity this was for the girls, Alberta Soccer allocated part of the Dr. Herb Link Memorial Fund to Aliah and Chasity – offering each a $500 grant.

Coach Sauze said both girls had “a fantastic experience: meeting and playing against local Cuban players as well as meeting aboriginal players from across Canada.” Furthermore, Team Alberta for the North American Indigenous Games invited both players to join their team in Toronto this July.

Alberta Soccer chose to use the remainder of the donation to support the Fort McMurray re-introduction camp it ran after last year’s wildfires. Read more about that great initiative here.