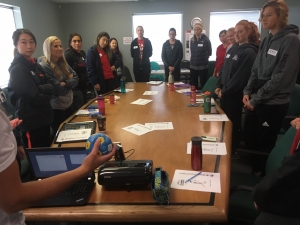 On September 23, 16 female coaches met in Calgary for Alberta Soccer’s First Steps into Coaching pilot event. The event, which was guided by four female mentor coaches, aimed to help more women feel empowered in their coaching roles and ultimately to pursue coaching certification opportunities beyond the grassroots level.

The mentor coaches led the group through discussions on the practical aspects of coaching and the female game before heading to the field for model sessions and a training festival with over 50 young female players.

“We had a great group of women who engaged in passionate and meaningful discussions about keeping females involved in soccer and sport in general,” explained Marissa Duguay, Alberta Soccer Grassroots Coordinator. “These ladies are positive role models for upcoming female players and are taking important steps in addressing the declining female soccer participation in our province and country.”

The event was a great success for those in attendance, and Alberta Soccer looks forward to seeing how the training will encourage more female coaching in the coming year. Well done to the coaches for coming in with an open mind, good dialogue and a great attitude. 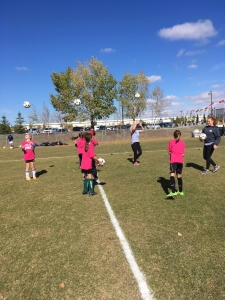 Alberta Soccer would like to thank the players for taking part and providing the participants with important coaching exposure. Duguay said, “The player festival was a lot of fun – the girls came out ready to play, and we saw lots of skill and talent from the young group.”