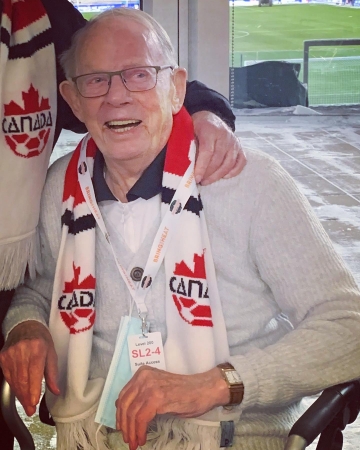 We are saddened to inform the passing of Jim Fleming, Alberta Soccer Life Member, who passed away on November 17, 2022, at the age of 87 years. Mr. Fleming is survived by his children Sean, Anne, Paul, and Angela. He was predeceased by his wife Kathleen, who passed away in 2016.

Born in Edinburgh, Scotland, on February 28, 1935, Jim Fleming moved to Canada with his wife Kathleen in 1968. He worked for the Government of Alberta Ministry of Labor for over three decades; however, his biggest passions were family, faith, and soccer.

He participated in our sport as a player and referee in Scotland and continued refereeing in Canada. Besides his on-field contribution, Jim Fleming played a crucial role in the development of soccer both province and country-wide. He was President of our Association from 1975 to 1980, later becoming President of Canada Soccer, a position he held from 1982 to 1986, and from 1998 to 2002.

His tenure as CSA President proved to be highly successful, leading the way for the Men’s National Team to qualify for the 1984 Olympics and 1986 World Cup, a first for Canadian soccer at the time. He was fundamental in implementing the Women’s National Championship, which had its first edition in 1982, and celebrated great achievements such as the CONCACAF Women’s Championship in 1998, and the Men’s CONCACAF Gold Cup in 2000, both of them historical results for Canadian soccer.

The celebration of Jim’s life will be on November 25, 2022, at 11 AM at Our Lady of Perpetual Help Church in Sherwood Park.