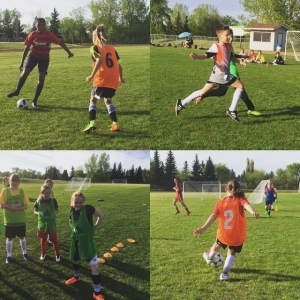 (May 24, 2017) – The May long weekend witnessed the fifth annual Mini Stars Residential Camp, with 60 players attending in Red Deer. Those involved were happy to dodge the weekend’s usual wet weather and instead enjoyed playing in the sunshine.

As in recent years, registration to the Residential Camp reached maximum capacity within a matter of minutes, and Alberta Soccer is grateful to everyone involved in making the camp such a success.

The camp is an ‘Introduction to Excellence’ program offered by Alberta Soccer’s Grassroots Development department.  It’s designed to provide Mini Stars’ athletes with an opportunity to experience a Provincial Team Program training environment and introduce them to a potential ‘next step’ on their soccer journey.

“There was tremendous talent and team spirit demonstrated by these young Alberta players,” said Manager of Grassroots Development, John Clubb, who was full of praise for the commitment and application of the players during the camp. “There were some very strong players who I anticipate seeing on future Provincial Teams.”

The emphasis of the camp was to prepare players for a bright future, and part of that included asking thoughtful questions of the participants during the weekend’s workshops. One such question, ‘What is the different between winning and success,’ is one many of us could benefit from considering.

The Mini Stars Program will continue on with registration for the pending Fall Outdoor Program, which will be held at SAIT (Calgary) and Concordia (Edmonton) in August and September. Registration opens on Monday, May 29 and is available to all players born in 2006/2007/2008.

“The hopes of the Outdoor Mini Stars Program is to allow players to celebrate the end of the outdoor season and demonstrate their development as well as their potential,” said Clubb. “But spaces are limited and registration is available on a first come, first served bases – so make sure you’re online on Monday morning!”