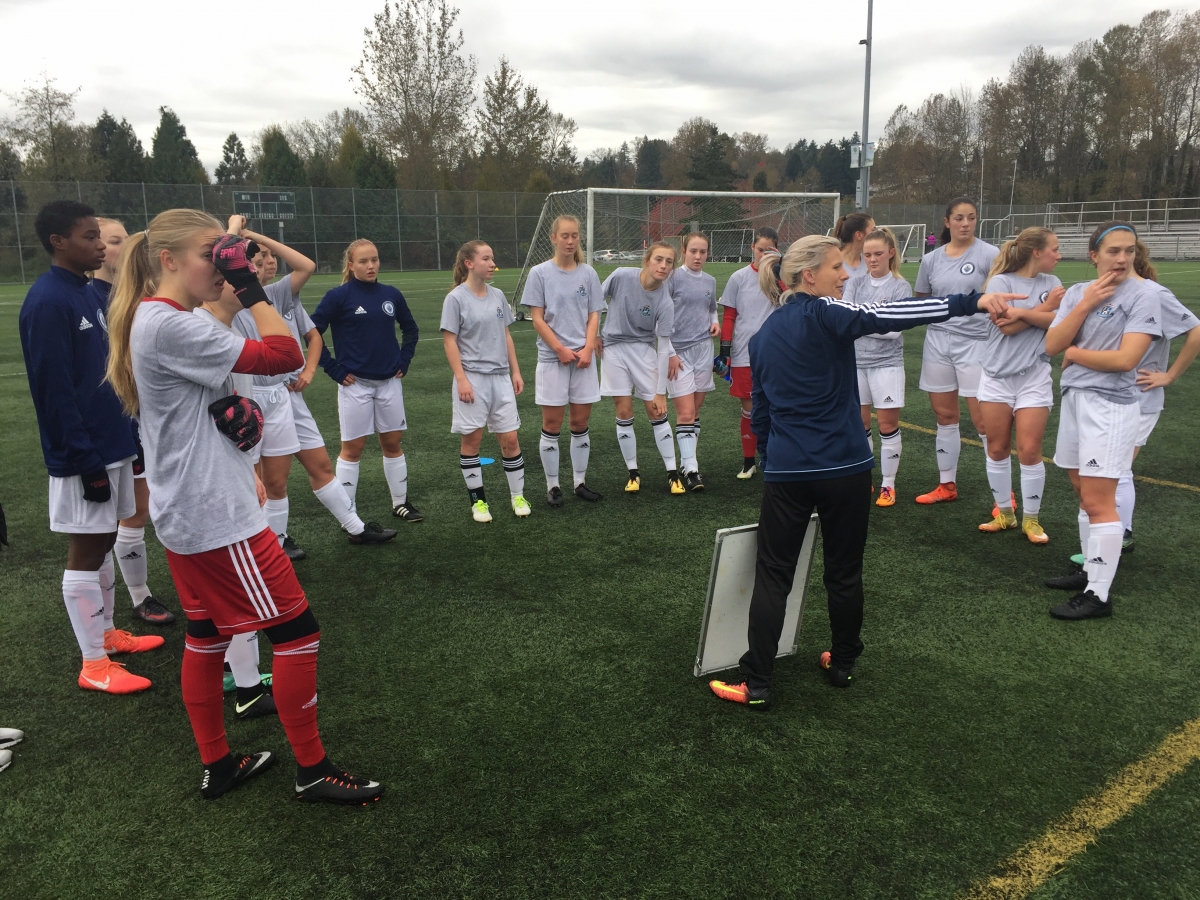 (May 31, 2018) The Regional EXCEL (REX) program for the best female players in the province wrapped up its second full year in April. The REX, a specialized training environment designed to improve player performance levels in alignment with Canada Soccer’s Women’s EXCEL national curriculum aims to allow female players to train on a consistent basis in a ‘best with best’ scenario.

The REX is supported by FC Edmonton in the north and the Vancouver Whitecaps in the south. This past year, 22 players were invited to the North REX while 29 players were invited to the South REX. The players who participated this year were born between 2001 and 2004 and identified by Alberta Soccer coaches through league and tournament play. “When I was in grade nine, I was playing in the regional centre against girls who were in grade 12,” said Caleigh Boeckx of the South REX. “The most noticeable aspect of REX that makes it unique is the fact that it allows a diverse range of ages to collaborate and help each other to improve. Since girls are being brought in at a young age, it promotes a lot of growth and the opportunity to learn from more experienced players.”

The curriculum for the REX focuses on seven global technical competencies as well as the 4-3-3 game model. A typical week for a REX player will include four training sessions, two strength and conditioning workouts, one competitive match as well as one to two grow sessions (video analysis, planning, reflection). Maddy Moran who has participated with the FC Edmonton REX for the past two years recognized the details that went beyond the on-field sessions, “With video analysis, we were able to break down various aspects of play which is an excellent tool in learning new techniques and from our mistakes. With the progress reporting, I was able to receive critical constructive feedback on my play and it allowed me to focus on the right technical and tactical areas for improvement.”

The competitive games and competitions always remain a highlight for the players as they have the opportunity to test themselves outside of the province and in front of Canada Soccer coaches. The 2000 and 2001 born players from both the North and South REX travelled to Burnaby, BC in November to play matches against the BC Super REX and had the opportunity to train with their staff and be watched by Canada Soccer’s National EXCEL Director, Bev Priestman. That same month, the 2002 to 2004 born players participated in the Whitecaps High Performance Players Combine. This competition was used to further evaluate and assess players within the REX environments. Finally in March, both REX programs joined up to head to Kelowna, BC to play high quality matches against the BC Super REX, the TOFC All Stars from the BCSPL and the UBCO Heat. This trip saw the girls tested against current youth national team players.

Many of the players from REX go on to earn scholarships from USport and NCAA Universities and Colleges while some have been invited to the BC Super REX program through the Vancouver Whitecaps in addition to the Canadian youth national teams. “REX allowed me to showcase myself in front of National team coaches and helped promote my abilities. I have received national attention and attended a couple U-20 Canada camps in Vancouver. REX also supported me in receiving my scholarship,” stated Boeckx.

This past year, from the South REX, Grace Stordy was invited to a combine with the BC REX and Andersen Williams was called into the U17 Women’s National Team for the U17 CONCACAF qualifiers in Nicaragua. In the North, Kennedy Gray was invited into the Women’s EXCEL U-17 camp in Burnaby BC. Having performed well at the Whitecaps HPP Combine, Eden Bretzer was invited back in February for a week trial for potential inclusion into the Girls Elite REX program for the 2018-19 season. Finally, after a number of successful Women’s EXCEL U-20 Camps, former AB North REX alumni Tanya Boychuk made the final roster for the CONCACAF Women’s Under-20 Championship which was held in Trinidad and Tobago in January 2018.

The 2018-19 REX program will look to begin again in mid-September with players being invited in August. For full rosters of both REX programs, please click here.