(September 29, 2017) – In Edmonton last weekend, teams from across Canada met to compete at the Western Men’s Masters and Women’s Regional Club Championship. Of the four male and six female teams that qualified from across the country, Alberta was represented by two Edmonton teams who enjoyed the opportunity to compete on home soil: Scottish Masters and Green & Gold Classics. 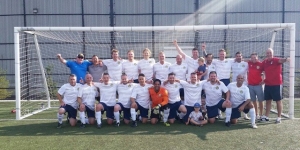 After winning the Alberta Provincial Championship title at Soccer Fest, the team qualified for Canada Soccer’s Western Men’s Masters competition. At the Western Canadian championship, the men started off with a draw against Manitoba, followed by a tight loss to the BC team, and eventually, a strong win against the men from Saskatchewan. Ultimately finishing second, the Scottish Masters were proud to take home silver.

“This was the first time our Scottish Masters have won provincials. We have been working on our program for a few years now and we have come a long way over the past two years,” said John McLean, Scottish Masters Head Coach. “Provincials was a great experience for our Team and going to Westerns and winning silver has made our lads even more hungry for next year. I see great things in the future for our Edmonton Scottish Masters program.” 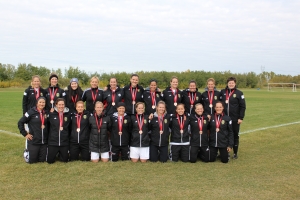 The Green and Gold Over 30 Women’s team qualified for their 4th CSA Regional Championship in the past 5 years over the September long weekend.  The team was very excited to represent Alberta on home turf as the event was being held in Edmonton.  After a convincing win over Manitoba, Green and Gold fell short of reaching the final with a 3-1 loss to the reigning champions from Quebec.  The team rallied to defeat Ontario in penalty kicks to claim the bronze medal.

“The team played some of their best football of the year when it mattered most.  I think playing at home brought out some truly great performances for many of the players and they should be very proud of what they accomplished on the national stage,” said coach, Mike Thome. “Now, we will build on that success to build back to the top of the podium in 2018.”

Congratulations to each of these teams for their provincial and national success!