(August 19, 2019) With the completion of the 2019 Western Canada Summer Games, Alberta Soccer would like to congratulate Team Alberta on its stellar performance. From the athletes’ energetic, positive, and supportive attitudes throughout the Games to their success on the podium, Team Alberta has much to be proud of.

Overall, the province earned 299 medals across all sports, placing Team Alberta at the top of the standings. In soccer competitions, both the male and female teams performed extremely well in their matches, ultimately earning gold in their respective competitions. 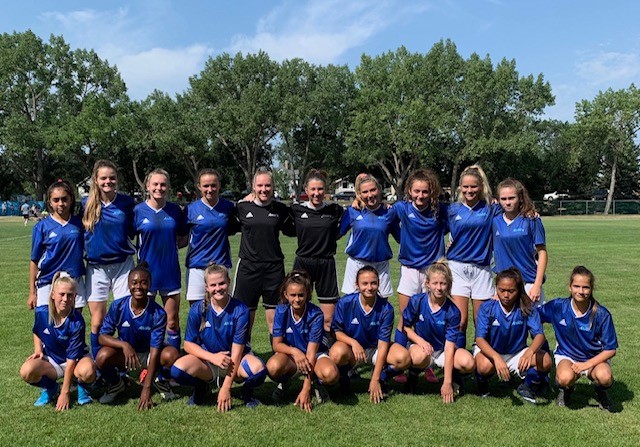 The Western Canada Summer Games started on a high note for the Girls squad, with a couple of wins against Northwest Territories and Yukon as they settled into the Athlete’s Village in Swift Current. In their third game, the girls came up against an organized Saskatchewan side who were difficult to break down. Of the match, the team’s Head Coach, Jordan Stewart said, “We had prepared to face an opponent who could hurt us defensively and the girls showed a lot of character and application to our game plan. It was a professional performance put in by the girls, and they got a great result in return.”

Throughout the Games, the girls grew closer together, enjoying their downtime watching basketball, recovering, and interacting with athletes from across Western Canada and the Territories. The girls were aided off the field by Mental Performance Coach, Perri Ford, who helped prepare them for their final match against Manitoba.

“Manitoba came out determined from the first minute and we were a bit slow to get going” said Stewart. “Going a goal down before the half, we knew we would have to come out with urgency if we wanted to take home gold.” Shortly after the break, Skylar Slade-Weinstein scored the game-tying goal, which would see Alberta through to win gold in the round robin tournament.

“I’m so proud of the girls and the way they performed on and off the field. It’s been a really great group to work with, and I’m elated that they got the result they deserved” said Stewart after the final whistle. 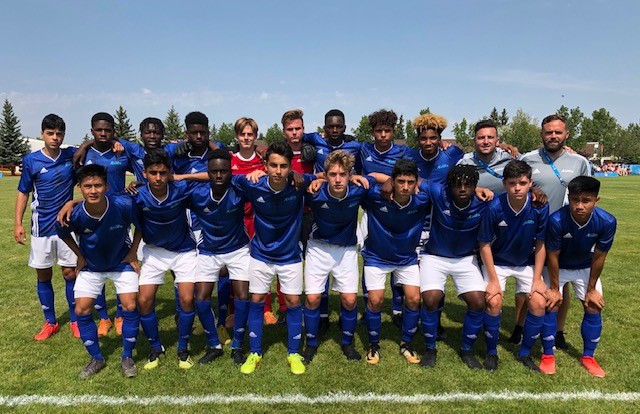 The Alberta Boys’ Team capped off a successful Western Canada Summer Games by winning Gold, following a 2-1 win against Manitoba.  Throughout the tournament, the boys grew together both on the field in their game performances and off the field as they became closer as a unified group.

The Alberta team started the tournament against the Northwest Territories, and after a bit of a slow start, three goals by Felix Mutuyemungu saw the team successful in their opening match.  The second game was a hard-fought battle against Yukon, where some timely goals and a bit of good fortune saw the team earn a 2-1 result. The closeness of the match against Yukon was an eye-opener and that, along with team unity sessions led by or Mental Performance Coach, Perri Ford, saw the boys deliver their best performance and result against the host Saskatchewan team.  Notwithstanding the successful results, the last game against Manitoba would determine the gold medal, with  Alberta needing a draw and Manitoba needing a win. Scoreless at halftime, Alberta trailed in the second half, but the team showed grit, character and resiliency by scoring two unanswered goals to secure the win and the gold medal.

Throughout the tournament, Perri Ford’s sessions with the boys helped them understand each of their individual roles within the team and their dependency on one another, and the off-field sessions even provided some of the week’s highlights. After learning how to work together, the boys displayed this support and unity with other Team Alberta squads – check it out here (Alberta boy’s soccer team supporting the Alberta girl’s basketball team)!

“The Western Canada Summer Games will always connect the players, even as they each go off to their respective club teams, academies, or schools,” said Franc Cioffi, Alberta Soccer Technical Director. “As each player moves on, they can always recall that a group of talented individuals, supported by their coaches, parents, Team Alberta mission staff, and the Games volunteers, grew together into a very talented team.”

Congratulations to each of the players and coaches for their success and performance on and off the field!

Alberta Soccer would also like to thank Perri Ford, Mental Performance Coach and Cam Berwald, Team Alberta Mission Staff, all players and families involved in the trials and training camp, and the volunteers of Swift Current for putting on an unforgettable event for all involved!