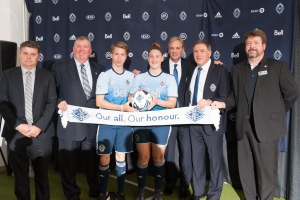 19 Albertan players currently at the club

VANCOUVER, BC – Vancouver Whitecaps FC and the Alberta Soccer Association announced on Tuesday a new player development partnership, which will include an academy centre in Calgary.

“We’re ecstatic to be partnering with the Alberta Soccer Association,” said Whitecaps FC president Bob Lenarduzzi. “The province has proven to be one of the top talent regions in the country, as we have already seen in our programs.”

“We’re thrilled to work together and connect Alberta to our Academy centre network and player pathway across the country for the benefit of the sport in Canada,” added Lenarduzzi.

“We are ecstatic to be able to implement and promote a formal partnership with an MLS club in Vancouver Whitecaps FC,” said Shaun Lowther, technical director for Alberta Soccer. “Whitecaps FC have shown their commitment to developing homegrown talent over the years and this partnership helps us to demonstrate a clear pathway for both male and female players in southern Alberta who are looking to advance to the next level of their soccer careers.”

The Alberta Soccer Association are home to over 90,000 members, making it the province’s largest individual sports association.

“The ASA, Calgary Minor Soccer Association, and the member clubs have been doing a great job in developing players through their pathway,” noted Dan Lenarduzzi, Whitecaps FC director of soccer development. “We’re really looking forward to working collaboratively with all parties to enhance that pathway through our professional structure. We also want to recognize the support and resources of the local clubs that have and continue to develop players and place them into the ASA and Whitecaps FC programs.”

Whitecaps FC will collaborate with the ASA to enhance the current ASA high performance programing, which will include rebranding the current Regional Performance Centre program in Calgary to Boys Residency and Girls Elite REX prospects programs with the top players from the province filtering into the professional club environment in Vancouver through the Whitecaps FC Residency and Girls Elite REX programs. The girls program in Alberta will also be an official Canada Soccer licensed Regional EXCEL (REX) centre.

A Whitecaps FC Alberta South Academy Centre head coach will be placed in Calgary and staff will make regular visits to Alberta, while players will also have the opportunity to travel to Vancouver for further evaluations and tournaments. All new programs are planned to phase in this fall and winter.

Whitecaps FC will operate in Southern Alberta, while still continuing a close relationship with professional club partner FC Edmonton, who have five players from their academy currently in the Whitecaps FC Residency program this year.