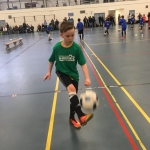 April 10, 2017 – This weekend, over 160 young players, 20 Regional EXCEL (REX) players, and 1 National/Professional player came together for the 2017 Mini Stars Showcase in Edmonton.

The showcase, which was for the 2005/06/07 participants of the Mini Stars Program, featured the Preferred Training Model. It was led by FC Edmonton REX players, Alberta Soccer coaches, and a guest presenter: Nik Ledgerwood.

“We were delighted to see a few different generations of Albertan players together under one roof,” said John Clubb, Alberta Soccer’s Grassroots Development Manager, “Not every grassroots player will become a high-performance player, but Nik Ledgerwood is a high-performance player who started out in our Albertan grassroots of soccer – and let’s hope with his support we can inspire future generations.”

For more information about grassroots soccer, watch our #thisisgrassroots video